Don’t Believe The Common Myth About “Haole” In Hawaii

Pale strangers stumble ashore from the great sailing ship that has just appeared along a Hawaiian coastline in the late 1700s. Polite Hawaiians attempt to greet them in the local style, but these newcomers reject the traditional practice of touching noses. The Hawaiians conclude that these strangers are “without breath,” or spirit — in other words, ha (breath) ole (without). Put the words together, and we have the common word for Caucasians. Right? Wrong. 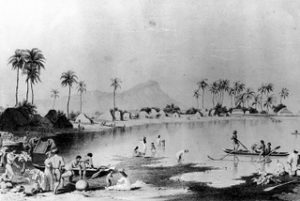 In fact, the word haole is an ancient one, far predating Western contact, meaning “foreigner.” It is found in the Kumulipo, a creation and genealogical chant that was recited for Captain James Cook during his visit to Hawaii Island in 1778.

Isolated though they were by that time, the Hawaiians’ cultural traditions recalled the days when strangers arrived from other islands to the south. Now they would have to deal with a new kind of haole, one who brought an alien world and all its changes to this ancient island civilization.

Today, the word haole has fallen into disrepute, exemplified by the erroneous story that claims newcomers lacked the all-important breath of life. But it is really a neutral word, simply describing someone or something from another place. Any value judgments it implies reside in the attitude and adjectives supplied by the user of this honorable old word.